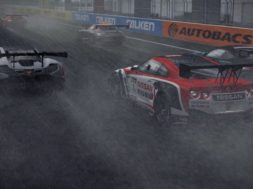 Many racing fans and enthusiasts are waiting in anticipation for the upcoming game, Project Cars 2 in VR. Developed by Slightly Mad Studios, the game puts you in the cockpit of some of the fastest cars in the world.

This sequel game to Project Cars will have vast improvements from the first generation of the game including new cars like the Acura NSX and Porsche 911 GT3 R. Additionally, you’ll be able to choose from different courses and various weather patterns to keep you on your toes.

Recently, a YouTuber by the name of Beetesjuice had the opportunity to get his hands on the VR version of Project Cars 2 where he aggressively raced down Nordschleife in his 911 GT3 R. In the video, you can see the amazing details that have gone into making this game. You’ll be in full command of the super car where you’ll be steering the monster machine in first-person view.

In this particular demo, Beetesjuice is driving in rainy conditions. Whenever he makes a tight turn its clearly visible that his viewing angle shifts just as you’d be doing in real-life. There are also no distractions from keeping you looking straight ahead; no maps, no timers, nothing.

Project Cars 2 is set to release for the HTC Vive and Oculus Rift on September 22nd. Slightly Mad Studios hasn’t confirmed yet if it’ll launch on PlayStation VR. It’s probably not likely after Gran Turismo for PSVR got some bad reviews.