Fun Ways To Celebrate May the 4th For Star Wars Day 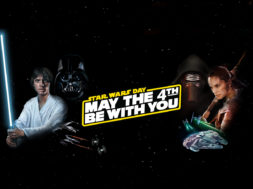 Fun Ways To Celebrate May the 4th For Star Wars Day

May the 4th, also known as Star Wars Day, is once again upon us. During this day, we celebrate anything that has to do with George Lucas and his amazing creation of the Star Wars universe. Many fans — like myself — often dress up in a storm trooper suit and record ourselves doing something weird. But others, take it a step further and go beyond the realms of mortal humans.

Learning to play a Star Wars song on an instrument

Depicted in this article by Local Masters, some Star Wars fans go the lengths of learning how to play their favorite song on an instrument. Whether it’s learning a Star Wars song on the guitar, piano, drums, or even a flute, they are able to celebrate May 4th at a higher level.

If you are interested make sure to book a lesson with an instructor in your local area.

Beat Saber by Hyperbolic Magnetism just released on May 1st. And in an unusual coincidence the game was released just before Star Wars Day. In Beat Saber users wield two different colored lightsabers in their hands and slash through the oncoming beats which are in the form of 3d blocks. They are color coded for the different colored lightsabers where you must slash through them accordingly.

Some have even turned it into a double-edged lightsaber where they are able to slice through the boxes like Darth Maul. Just take a look at the video below.

You can purchase the game today on Steam or Oculus for the HTC Vive, Rift, and Windows mixed reality headsets for $19.99.

Dressing up in a DIY Star Wars costume

Sure you can buy a costume and dress up as a Star Wars character but what’s even more exciting is to create a DIY costume o your own. You don’t want to have to look like everyone else where you wear the same thing as thousands of other people.

There are numerous guides out there that can teach you in how to create a unique Star Wars costume all to yourself. Here is one example of that in this video.

Make sure to get creative this Star Wars day on May 4th. May the force be with you young padawan.