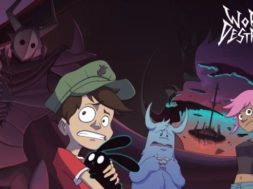 Some of the hottest shows on television are currently Rick and Morty, South Park, Archer, and Family Guy which are all animated by creative individuals who are looking to share stories in a different way. These animators are able to create unique ideas and tell the stories in ways that can’t be done with real-life actors. We recently discovered a group of animators at a studio called Nominous Animation who are essentially trying to accomplish a similar goal with their IP called World Destroyer.

This 2D animated feature film tells a tale of two siblings living in the aftermath of their parents’ separation. Enrique, one of the main characters in the film is a shy and passive individual that’s  be pushed out of his comfort zone by his eclectic and rebellious sister Nadine.

The kids are introduced to a half-formed planet named Nor when a mysterious rabbit-like creature pays them a visit. Following not too far behind is Prince Exoxeneph of Nor, leader of a race of humans called the Ipheris. It seems the Ipheris have known about Earth’s existence long beforehand and are already preparing for its conquest.

The video above is a short clip from what they’ve created so far. The video features Enrique sitting in his room with his pet rabbit when all of a sudden his sister, Nadine barges in asking for his help. After she departs from his room, Enrique hears a loud scream to which he runs over to Nadine’s room to find a knight kidnapping Nadine. All of a sudden his pet rabbit transforms into a sword which he uses to fight the mysterious knight. But soon after the combat, the knight opens a portal to where he escapes with Nadine in his hands.

Nominous Animation has created a well thought out story thus far but hasn’t been able to produce any further. In order to finish World Destroyer, they launched an IndieGoGo campaign to help them finish this featured animated film. They are looking to raise $300,000 so that they can hire more animators and go full-time in trying to finish their work.

Athony Gardea, Animation Director at Nominous Animation has stated that it took him 2 years to make 2 minutes of animation for World Destroyer. Currently, the animation is created at 24fps meaning that it has 12 drawings per second. You can notice the fluid motion which makes it quite striking, visually.

What are your thoughts on the 2D feature animated film, World Destroyer?