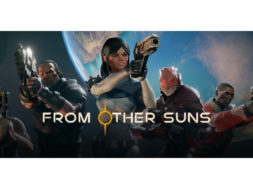 Happy New Years to everyone! 2018 seems to be off to a great start as From Other Suns by Gunfire Games is currently 50% off on the Oculus Store. The game is usually $40 MSRP but seems to be on a deep discount for $20. Great news for Oculus Rift users who don’t currently own the game.

From Other Suns Overview

From Other Suns offers a very unique VR experience mixing the joyful elements of FTL with FPS. It’s like they threw FTL, Robo Recall, and Lone Echo into a blender to make this game, which is a compliment. Also, having the options to choose teleportation or locomotion while sitting or standing shows how much they care about the gamers and the overall experience.

Make sure to check out our review of From Other Suns which goes into more detail about gameplay, story, and mechanics.