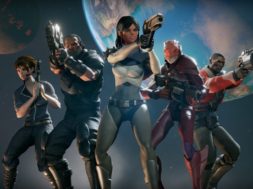 Recently, there’s been a lot of games and experiences releasing on the Oculus Rift. Oculus has been working hard with developers and studios to release IPs that are enjoyable to play in VR. Next month, there’ll be another big VR game to look forward to as Gunfire Games will be releasing From Other Suns on November 14th for the Oculus Rift.

For those of you unfamiliar with the title, From Other Suns is a co-op VR space adventure game that’ll take you to the edges of the universe. The story revolves around a crew of people who recently tested an experimental folding drive to travel beyond the fringes of explored space. The plan was to return safely for a big payout, and retire on small colony to never be heard from again.

Gunfire Games held an open beta for From Other Suns earlier this month that went on to impressive a lot of people. Now the official release is only a few weeks away. For those of you interested in the game, you can pre-order From Other Suns on the Oculus Store for $34.99.

tags: from other suns gunfire games oculus rift game oculus store
previous Oculus Founder Palmer Luckey Seen Together With Steve Bannon And White Supremacist Chuck C. Johnson
next The Story Of Melita Will Take you Across The Universe
Related Posts