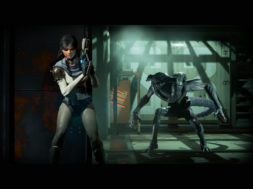 Gunfire Games has announced the open beta weekend for upcoming game, From Other Suns. This upcoming VR FPS title is a highly anticipated game for the Oculus Rift community and we’ll soon be able to test what it’s capable of.

For those unfamiliar with the title, From Other Suns, is a game that takes place in outer space. You used to own your own ship, a crew, and steady work but things went into turmoil where you and half of humanity are trapped on the far side of the wormhole with ruthless pirates, scheming corporations, and worse—new threats from outside known space.

There’s danger lurking at every corner and you’ll be facing rentless enemies on this side of the wormhole. You and up to two of your friends will tour the sector, upgrading your ship, stockpiling weapons, and fighting for your lives. And when you all die, you’ll discover new challenges in your next play-through.

Your goal in this game is to fight and try to save humanity, or just joyride through the galaxy until its extinction. Gunfire Games has left this option open to you to make your own decision.

From Other Suns has been in the works for quite some time now but we’ll soon see it arriving on Oculus Rift this month through open beta weekend on September 29th through October 1st. If you’ve been looking forward to the game, make sure to be available this weekend as it’ll be the first beta open to the public for free.