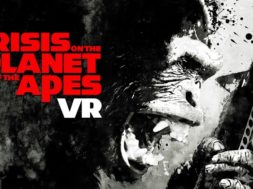 Five years since its outbreak, the Simian Flu has wiped out half of humanity and left other primates…evolved. Now at the crossroads of two species’ destinies, you are an ape with advanced intelligence, captured and held prisoner in a heavily guarded scientific facility as mankind desperately searches for a cure. Your mission: confront human aggression as you climb, jump and shoot through the chaos of an apocalyptic world to escape with your fellow apes and return home to Caesar.

The unique and distinct features of Crisis on the Planet of the Apes is that you will be able to climb, jump, and shoot as an ape unlike most FPS VR games. In this instance, the humans are the bad guys that you must eliminate in order to fulfill your mission.

In the gameplay trailer above you can see how the ape reloads his assault rifle, shoots at the humans, and even super man jumps to punch a man in the face. The game also seems to have a darker tone bringing alive that intense situation you see in the movies.

“VR has always held the promise of bringing together the cinematic storytelling of film and the deeply immersive interactivity of games. Crisis on the Planet of the Apes VR takes this potential to the next level,” said Brendan Handler, senior vice president and general manager of the FoxNext VR Studio, in a statement. “We set out to give the fan a lead role in this dark Planet of the Apes world — to feel the ape’s strength, power and movement as he fights his way to safety.”

Crisis on the planet of the Apes VR will be available on PSVR, Oculus Rift, and HTC Vive. The VR game itself will be releasing on April 3rd for $15 USD.

tags: 20th century fox crisis on the planet of the apes vr foxnext studio planet of the apes vr
previous Facebook Pulls Oculus Rift Station From CPAC For Its Violent VR Experience
next Oculus Go Set To Perform Better Than The Galaxy S7 But Not The S8 Or S9
Related Posts