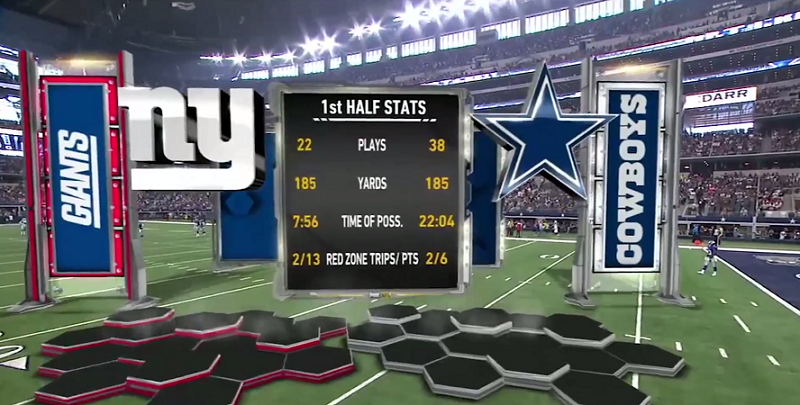 Augmented reality is an untested technology with a whole lot of potential according to Tim Cook. He believes that the AR (augmented reality) market will have a higher threshold than that of the virtual reality industry. Both technologies distort dimensions with digital displays, objects, and interactive modules. But AR differentiates itself by bringing 3D images to the physical world and Fox Sports looks to take advantage of that.

Fox Sports broadcasting network will be applying augmented reality technology in the form of stats, numbers, and scoreboards to 2016 NFL games and other sporting events. During the New York Giants VS. Dallas Cowboys game we were able to see just how the network applied 3D images on to the football field.

Fox Sports displayed the important stats, logos, and team names in a sleek looking fashion, similar to how video games project important information. AR technology allows us to have depth perspective of 3D images and size according to distance. Fox Sports believes that this AR technology will play an integral part for future sporting events.

“This allows us to stay in the field of play and keep the audience connected to the game and still get the information up,” said Michael Davies, vice president of field and technical operations for Fox Sports.

To deliver AR technology on to the field, Fox Sports had to partner up with Skycam, Sportvision and Vizrt. Skycam provides the tracking and data. Sportvision provides the optical tracking info. Vizrt provides the rendering and producing of 3D graphics while taking into consideration the distortions that arise from physical footage.

But Fox Sports isn’t the only company looking to bring AR to NFL. Microsoft released a commercial that transforms a room into an interactive environment during a live NFL game. Using their developing AR headset called the Hololens, users will be able to see see digital displays of 3D objects and images that are relevant to the ongoing NFL game.

Currently, Microsoft supplies the NFL with Surface tablets to go over replays. Microsoft might be looking to further their relationship with the NFL by integrating augmented reality technology with the fan base.

We look forward to the different ways in which AR technology can be applied.