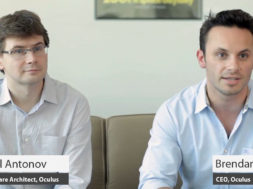 In 2016, Brendan Iribe stepped down as the CEO of Oculus in pursuit of leading the PC VR division. And in just 2 years time, Brendan Iribe has announced through Facebook that he will be leaving the company (Facebook) as a whole.

So much has happened since the day we founded Oculus in July 2012. I never could have imagined how much we would accomplish and how far we would come. And now, after six incredible years, I am moving on.

I’m deeply proud and grateful for all that we’ve done together. We assembled one of the greatest research and engineering teams in history, delivered the first step of true virtual presence with Oculus Rift and Touch, and inspired an entirely new industry. We started a revolution that will change the world in ways we can’t even envision.

Yet, as far as we’ve come, the journey has just begun. Michael Abrash is right: “These are the good old days”. Now is when we get to pioneer the foundation of the next great computing platform and medium – this is our time to be pushing the state-of-the-art onward and upward. Every part of VR and AR needs to improve, especially the hardware and core technology, and Oculus has the best team in the world to do that. Although we’re still far from delivering the magical smart glasses we all dream about, now they are nearly within our reach.

Working alongside so many talented people at Oculus and Facebook has been the most transformative experience of my career. We have a saying when someone compliments or thanks you – “Team effort”. The success of Oculus was only possible because of such an extraordinary team effort. I’d like to sincerely thank everyone that’s been a part of this amazing journey, especially Mark for believing in this team and the future of VR and AR.

As for me, this will be the first real break I’ve taken in over 20 years. It’s time to recharge, reflect and be creative. I’m excited for the next chapter.

Brendan Iribe is the second member from the founding team to step down since the acquisition of Oculus by Facebook. Founder, Palmer Luckey, stepped away from the company in March of 2017. Iribe hasn’t described the reasoning behind his departure or where he will be heading next.