Five Nights At Freddy’s VR: Help Wanted Is Here To Give You A Scare 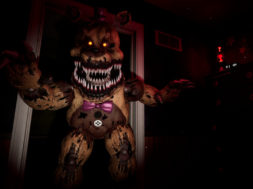 Five Nights At Freddy’s VR: Help Wanted Is Here To Give You A Scare

Scary games usually seem to get even more scarier when its played through VR. With the immersion and the virtual world that is created around you, you dive into the creators imaginations and their deep dark secrets. This is definitely true with Steel Wool Studios’ Five Nights At Freddy’s VR: Help Wanted.

Five Nights At Freddy’s VR: Help Wanted is a collection of classic and original mini-games set in the Five Nights universe. Survive terrifying encounters with your favorite killer animatronics in a collection of new and classic experiences.

Five Nights At Freddy’s VR is currently available for both the Oculus Rift and HTC Vive on Steam for $29.99. The reviews have been very positive and it might just be the right time to check out this scary experience yourself. Oh and check out Mark Plier going through this experience himself.

tags: FIVE NIGHTS AT FREDDY'S VR scary vr game Steel Wool Games
previous Is Wave Circles As Fun As Beat Saber In VR?
next Its Time For You To Meet ThunderGod In VR
Related Posts