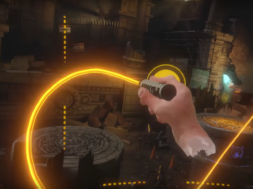 On May 15, Oculus will kick off the first ever VR Esports tournament held by the company. Contestants will battle each other to see who the craftiest sorcerer is in the game The Unspoken, one of Oculus’ top sellers. There will be a local round, regional round, and a final round in which the grand prize winner receives an ASUS VivoPC X Oculus Ready machine, Rift + Touch, and $1,250 cash.

Oculus teamed up with Microsoft, Insomniac Games, ASUS, ESL, and Intel to host this in-store battle for competitive conjuring and magical domination. It will take place in 80 stores across the US and Canada (excluding Quebec), with more than $7,500 in prizes up for grabs, plus a trip to NYC for the finals.

Regional rounds will take place on May 20, and the winners of the competition get roundtrip airfare to NYC, a two-night hotel stay, and $150 cash. The final round is on June 3, where eight finalists duel live for the grand prize at Microsoft’s NYC flagship store.

Will you be competing to show off your wizardly clout? We’d love to hear from you in the comments below!