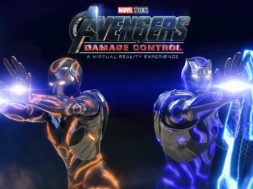 Marvel Studios in partnership with ILMxLAB has announced a unique VR experience where fans can fully become their favorite superheroes in “Avengers: Damage Control.”

Starting on October 18th, fans will be able to go to select locations at The VOID and experience the unique IP in all its VR glory.

“We’re always looking for new stories and corners of the universe for our characters to explore. Now, after more than a decade of amazing support, we are excited to give fans the same opportunity: to be a part of the Marvel Cinematic Universe,” said Kevin Feige, President of Marvel Studios. “Expanding how people can experience the MCU is something we’re always trying to do, and in Avengers: Damage Control, we wanted to give fans the chance to suit up alongside some their favorite heroes for the first time ever.”

In Avengers: Damage Control, fans will be stepping into the MCU for the very first time to team up alongside Earth’s mightiest heroes. Fans will be enlisted by Shuri (Letitia Wright) to test her latest prototype design: Emergency Response Suits, created with a proprietary blend of Wakandan and Stark Industries technology. When sinister forces intervene, guests at the Wakandan Outreach Centers will soon find themselves recruited into action, exploring iconic locations across the MCU. Fans will fight side by side with Avengers like Doctor Strange (Benedict Cumberbatch), Ant-Man (Paul Rudd), the Wasp (Evangeline Lilly), and more.

“The opportunity to bring such a beloved universe alive through immersive storytelling has been a once-in-a-lifetime opportunity,” said Shereif Fattouh, Senior Producer, ILMxLAB. “Avengers: Damage Control lets you feel what it’s like to shoot repulsor blasts with your own two hands, suited up in Shuri’s latest technology. This original adventure allows you to go beyond the screen, and become a character in the story itself.”