The First Legendary To Be Revealed During Pokemon Go Festival 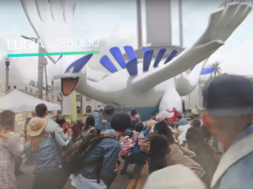 The First Legendary To Be Revealed During Pokemon Go Festival

As part of the ongoing celebration of Pokemon Go’s one-year anniversary, Niantic has announced that the first Legendary Pokemon will soon be available for trainers to try and capture. Millions of trainers around the world will have the opportunity to battle and challenge these rare Pokemon through particular raid events and quests.

“As Trainers around the world go out and explore their neighborhoods in search of Pokémon and Raid Battles, they can keep an eye out for unique Legendary Eggs appearing at Gyms,” stated Niantic on their official blog. “If Trainers and their team are able to successfully defeat a Legendary Raid Boss, they’ll have the opportunity to catch a Legendary Pokémon of their own! While Legendary Pokémon will help them take on the toughest Raid Bosses and Gym Battles, they’re not willing to leave their Trainer’s side, so they can’t be left to defend Gyms.”

During the first Pokemon GO Festival held in Grant Park, Chicago, millions around the world will be working together to unlock in-game bonuses for the entire Pokemon Go community. If trainers manage to catch enough Pokemon during the Pokemon GO Fest Challenge Windows, the first legendary Pokemon will be revealed in Grant Park. On top of that, if the Trainers in Chicago succeed in defeating the Legendary Pokémon, that Pokémon will start appearing in Raid Battles around the world, after Pokémon GO Fest.

In the trailer we can see a glimpse of Legendaries such as Lugia, Ho-Oh, Moltres, Zapdos, and Articuno. But it’s not confirmed as to whether these Pokemon will be the first available legendaries in the game

For trainers who can’t make it to the event, you can tune in live through Twitch or YouTube for the latest news coming out of Pokémon GO Fest including Challenge Window updates, exclusive interviews, and the reveal of the first Legendary Pokémon.

This is what everyone’s been waiting, the opportunity to catch the first legendary Pokemon. We’re rooting for trainers all around the world in making this happen. Pokemon GO Festival will be taking place tomorrow on July 22nd so stay tuned on our Facebook page and Twitter to keep up to date on the latest happenings in the Pokemon GO world.