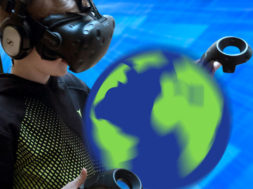 Earth Day isn’t just for elementary school kids anymore. April 21-23 of this year, Boston is hosting a VR Eco Hackathon called VR EcoHack. This community event is designed to encourage climate change consciousness and provide a solution that creates educational tools for climate change awareness in schools. This is the first eco-conscious VR event to ever take place.

VR EcoHack is a free, community-based, media covered weekend for creatives, coders, educators, students and activists to come together to produce virtual reality content that highlights key sustainability issues locally and around the world in VR, AR and 360 video. The weekend will kick off at 5:30pm on Friday, April 21st with a free public expo of VR, AR and 360 demos, climate change speakers, followed by hackers starting their engines soon after 7pm.

Kathy Bisbee who is the executive director and co founder of Public VR Lab was the great mind behind bringing this event to life. Public VR Lab’s goal is to train content creators in multimedia, and now in VR, to develop content in the public and community’s interest. It is an extension of their community media arts centers. The organization, springs from the tradition of media driven public access to free speech, government transparency, and social documentary. Bisbee sees her mission as more far-reaching than just that. She wants to train the next generation of storytellers, promote creativity and skill development in VR-related technologies, and educate the next generation of coders and the IT crowd on climate change and media literacy. Last fall the Lab started a VR Academy and began providing free public demos weekly in their Brookline and Northampton locations, at the senior and teen centers and in public spaces, and organized meet ups and hosted hackathons to help educate the community on these new tools.

Bisbee plays as Princess Leia shown above in the Parody Star Wars video. “It felt like a way we could show some respect to Carrie Fisher, to Star Wars fans everywhere, and create an awesome promotion for the event to encourage a diverse response for signups. So far, over 50% of the hackers who have signed up are women participants, and the age range is 13-65, so I think we are doing something right to make this an inclusive and empowering event for all,” said Bisbee.

Bisbee says VR is a compelling platform to boost climate change awareness because of its power to transport people into the imminent wrath of mother nature. “VR content is more deeply personal because of its highly visceral and persuasively-real experience. Inside of VR, you can actually feel the physical threat and reality of sea-level rise when water starts pouring in all around you,” Bisbee said.

There’s still time to Save the Planet: Hack the Future! Signup here.