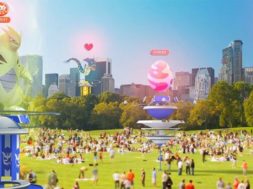 Roughly around 20,000 trainers around the world attended the first annual Pokemon GO Festival at Grant Park in Chicago. This event was set to be a great time for everyone where players saw the unlocking of the very first legendary Pokemon. But things did not go according to plan for Pokemon GO creators, Niantic. Thousands of users at the festival started to notice that they couldn’t log into the game due to network issues.

When John Hanke, CEO of Niantic took to the stage, the crowd let out a loud boo to know their frustration of the festival and their unhappiness of not being able to play the game.

Niantic has released a statement apologizing to fans that were in attendance.

Today at Pokémon GO Fest in Chicago, technical issues created problems for a large number of players attending the event. From everyone at Niantic, we apologize to all of the Trainers who came out to Pokémon GO Fest today. Although we were able to solve many of the technical issues, we were not able to offer every attendee a great experience.

Niantic has promised that it’ll be issuing refunds for attendees along with $100 in PokeCoins, and a “Special Pokemon.”

Currently, trainers around the world are able to participate in raids that’ll allow them to catch the legendary Pokemon such as Lugia and Articuno.