Home VR Games Through The Fire And Flames By DragonForce Makes Its Way To Beat Saber
VR Games
VR News
May 8, 2018 Griffin Streeter 1 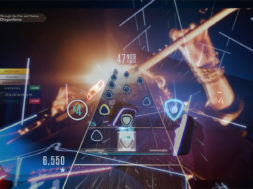 Remember back in the day when you tried playing “Through The Fire And Flames” By DragonForce on Guitar Hero? Well, it has made its way onto Beat Saber thanks to the modding community and a modder named Freeek. While the platform of the old and new have major differences, the songs intensity and button jamming idea lives on.

In this demonstration video by Freeek you will see that he swings his dual lightsabers with intensity, almost as if his life depends on it (sort of). The rhythm blocks come in waves after waves which almost appears to be impossible to slice them all.

The modder and YouTuber has also mentioned that he is having to work with the 3D editor developer as the song has caused a “few issues” which involves loading time and saving progress. He adds that they’ve recently lost “500 notes live on stream working on this” and that it’ll be completed by the end of this week.

For those of you anxious to upload and chart your own songs on Beat Saber, you can download the mods today for free. Beat Saber has mentioned that they’ll be releasing an alfa version of Level Editor where you can create your own levels for your audio files. They will provide more info on this Friday.