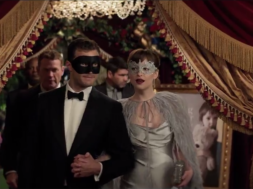 Fifty Shades Darker is one of the most anticipated movies of the year, famous from its hit novel series Fifty Shades of Grey. The movie follows the journey of two characters named Christian Grey and Ana Steele who are trying to determine if they truly love one another.

Recently, Time’s Life VR released a virtual reality experience of the movie titled Fifty Shades Darker: The Masquerade Ball where it takes you inside a fancy Masquerade party. The experience features Christian Grey (played by Jamie Dorman) and Ana Steele (played by Dakota Johnson) in a unique setting where you can observe the party in 360.

Fifty Shades Darker: The Masquerade Ball is a memorable scene in the movie that takes place at the Grey family’s mansion. It’s quite a spectacle as you observe these people masked under a veil, enjoying a unique party. You’ll be observing Christian and Ana who are rekindling their passionate love for one another including their sexual romance.

The experience is quite short and can be viewed through the Life VR app on iOS and Android devices. Pair them up to VR headsets such as the Samsung Gear VR and Google Cardboard to fully immerse yourself into the world of Christian Grey and Ana Steele.

Fifty Shades Darker will be released in theaters on February 10, 2017, right before the big Valentine’s Day.