Feral Rites is a system based game experience on VR. The story of the game is set in Stone Fang Island, a mystical spell bound jungle covered by a high canopy of trees. It revolves around the life of a brawler, our main character, who was able to escape the island with his mother after the tragic death of his father, the chieftain of Stone Fang Island. After 20 years, he is back once more in the temples and ruins of the island to avenge his father’s death. Surrounded with camps of enemies, the character transforms himself from human to a ferocious Jaguar like beast. This is not your typical revenge game. Journey with the brawler on an action and mystical experience as you uncover the secrets magical twits behind his father’s death.

The game presents itself as a series of fights and adventures. The massive island opens a world of exploration experience in virtual reality. It also has an installed map to guide the players in the journey. The players will be able to take down enemies, work on missions, and finish quests. The fighting mechanics are very much complete in a combo counter. It has a locked overhead camera for switching scenes. The player can look around the scene as much as he wants. There are also moves which can be unlocked while playing the game. The game is exclusive for the Oculus Rift and will hopefully debut together with the Oculus Touch. The game has a longer playing time which is somewhere around 12 to 14 hours This is something very unique as other VR games currently don’t have that much content. 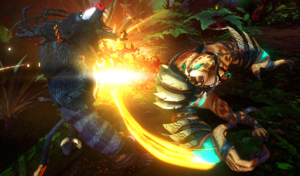 Feral Rites is an open world game with divided zones, a genre wherein conventional players are accustomed to. It’s a single player game which offers challenging puzzles to solve and fight scenes against feral beasts. The characters can be played in either a male or female fighter. The players can immerse themselves in different fighting attacks such as light and heavy attacks, a block, a grab and a dodge-roll. The beast mode enhances the skills of the player as they are transformed with more powerful attacks, defense and increased speed. There is an option for the players to trigger an attack against the enemy leading to a savaged death. There is no weapon to be used during the fights. The players will enjoy finding and upgrading armors that can customized their character and play style. There are a lot of fighting scenes executed in mid-air and fighters can switch from human into beast for longer combo–based combat system.

Feral Rites was developed and published by Insomniac Games, an American video game developer from Burbank, California, founded in 1994 by its CEO Mr. Ted Price. The developer whose expertise revolves in creating flat screen games is now putting a lot more effort in this new medium of VR for Feral Rites with more traditional camera angles to provide comfort for the users. Look for the game to release some time this fall.