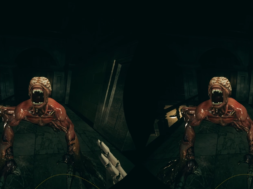 Many people around the world have been recreating games in VR. Just yesterday, we discovered a passionate developer who’s been recreating Tomb Raider II: The Dagger Of Xian for VR. Today, we’ve found another gem where a fan by the name of CryingHorn has been working on recreating Resident Evil 2 in VR using the Unreal Engine 4 platform.

CryingHorn seems to have been working on this project for quite some time as its evident through the detailed work seen in the video. CryingHorn stated that he’s making “a VR addition to his previous fan art of Resident Evil 2,” recreating the iconic RPD building inside the virtual world.

In the short clip above, you can see how he moves around in first person using teleportation. You hear the monstrous zombie sounds coming from outside and a typewriter you can play with in the center of the hall. You’re even able to move items around on the desk, which adds that little extra touch to detail. Additionally, when you head upstairs, you’ll see that scary looking monster zombie (Licker) that was so iconic to the Resident Evil 2 game. When CryingHorn goes up towards the monster to pet it (for some odd reason) the monster makes a slight lunge towards you to strike you with his crazy paw hands.

While this is just a build inside the RPD Main Hall, you can see how stunning the game would look and feel if it were to become a full remastered game for the VR platform.

Above is a reaction video by a YouTuber and his thoughts on this short Resident Evil 2 VR experience.

If you’re interested in trying out the Resident Evil 2 VR game made by CryingHorn, simply download this file. This experience can be played on both the HTC Vive and Oculus Rift for free. Would you want to see a full remastered Resident Evil 2 game for the VR platform?