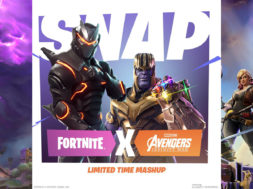 Here’s what we know about the Avengers: Infinity War crossover to Fortnite.

The “Infinity Gauntlet Limited Time Mashup” mode for Battle Royale will be exactly the same. However, what you will find interesting is that there is a new artifact in play: The Infinity Gauntlet. This is the one that Thanos wears in the Avengers: Infinity War movie.

Unfortunately, there will be no Avengers skins for users to buy. This is according to Nathan Mooney, community manager for Fortnite who states, “We have no plans for Avengers outfits in the store.”

But this whole event is quite huge in the bigger spectrum as Hollywood studios are recognizing the power of gaming communities and its effectiveness as a marketing platform. Hopefully we will be seeing more and more collaborations to the point where we get to play characters such as Iron Man in Fortnite. We might even possibly see Superman or Wonder Woman in these sorts of games.

This is a limited time cross-over event. The Fortnite Avengers: Infinity War will take place starting Tuesday, May 8th. The Infinity Gauntlet Limited Time Mashup will be available on all current platforms including PS4, Xbox, PC, Mac, and iOS.