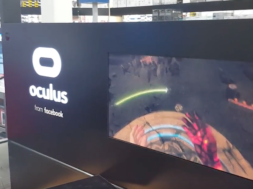 Last year around this time, Oculus was developing a lot of hype for the upcoming Rift VR headset. They garnered the market’s attention and infatuation for the newly developed Rift. And around May of 2016, the Facebook owned Oculus put multiple demo units across the nation at Best Buy stores, regardless of the fact that the units were facing delays in shipping. Today, we’ve learned that Oculus is pulling the plug on 200 demo stations from Best Buy locations across the nation according to BI.

Through their investigative reporting, Best Buy employees stated that there would be days where they wouldn’t see a single demo being conducted for the Oculus Rift. And while this sounds like alarming news, it really shouldn’t be. In a recent statement by the Oculus team they said, “We’re making some seasonal changes and prioritizing demos at hundreds of Best Buy locations in larger markets.”

VR technology is still in its infancy stages where there’s a lot of growing up to be done. The company has a lot of aspirations and goals on developing the large platform. They talked about the vision towards the end of last year at their connect event. Oculus is also backed up by one of the largest companies in the world, Facebook. They’ve invested heavily into Oculus and will continue to do so to improve the technology.

Also, removing the Oculus stations from these Best Buy locations doesn’t mean that you can’t purchase the units. You’ll still have the ability to go into Best Buy and purchase the VR headset from the shelves.

While this bit of news might sound alarming at first, you have to realize that Facebook owns the largest social media platform in the world. If Facebook truly wanted, they can out-market the rest for the Oculus Rift headset.