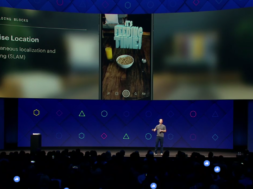 This morning marked the opening of Facebook’s F8 developer conference where Facebook CEO, Mark Zuckerberg, announced that they are making “the first mainstream augmented reality platform.” A closed beta version of this platform launches today for specific groups and individuals. According to Zuckerberg, people are moving away from text and embracing the camera’s benefit for social interaction. Zuckerberg informed the audience that “act one” of today’s announcement actually happened last week, with the addition of the camera function across all of Facebook apps, while “act two” is today’s actual beta launch.

This AR platform will allow people to mix the digital and physical worlds, resulting in an enhanced, superior physical reality. In the future you’ll be able to replicate this technology in realtime atop the real world, though that is still a ways away.

But starting today, select beta testers will be able to open a camera and access AR functions. Additionally, you can create your own effects which is open to the entire community, allowing access to creators’ contributions from all over the world. Three usage cases for these basic effects — which we’ve already seen primitive adaptations of on our smartphones — will be receiving a major upgrade with this AR platform. Zuckerberg explained that we will be able to display information (overlay directions, messages, notifications on top of physical objects), add digital objects to our physical world (ex: a chessboard or television), and enhance existing objects (ex: Harry Potter fans could transform their house into Hogwarts for special occasions).

Rolling out as the technology progresses will be precise location technology using the AI technique known as Simultaneous Localization and Mapping (SLAM), 3D effects (you will be able to virtually fill a room with water — or Skittles, whatever strikes your fancy!), and object recognition. Watch the Zuckerberg’s F8 opening to see all the real world uses of this specific AR technology.

This new platform for AR will be ‘open’, according to Zuckerberg, though it’s launching in closed beta today. There will be more stories developing throughout F8’s opening day so make sure to stay tuned as we keep you updated with the latest from this exciting developer conference!

tags: ar news Augmented Reality f8 facebook mark zuckerberg Simultaneous Localization and Mapping
previous Experience What It's Like To Re-Accommodate People Off Of Airplanes Like United Airlines In This Upcoming VR Game
next Snapchat Looks To Further Augment The Real Space With World Lenses
Related Posts