Experience a virtual reality tour of Yosemite With President Obama

Experience a virtual reality tour of Yosemite With President Obama

President Obama was seen earlier this year trying out a VR headset. Now, he can actually be seen in a 360 VR project in partnership with the National Geographic team, Felix & Paul Studios, and the folks over at Oculus.

The content takes place at Yosemite National Park with President Obama and his family in attendance. They take a trip over to the national park during Father’s Day weekend for a family getaway. The video walks you through their adventure throughout the park, meeting students on the journey, interacting with the park rangers, and hiking through some of the most famous landscapes in Yosemite. 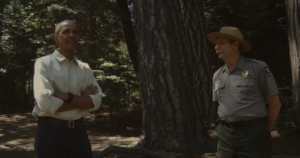 National Geographic found it of importance to create awareness for the anniversary of national park services and believe that virtual reality is a perfect medium to create awareness to this cause. “We see virtual reality as a new frontier and are thrilled to use this powerful medium to help celebrate National Park Services centennial anniversary,” said Rajiv Mody, VP of Social Media at National Geographic.

Throughout the video, you’ll also get to experience spectacles such as a time-lapse of the sun setting across the slopes and floating in a canoe with the president.

Felix & Paul Studios put together a great initiative and storyline to portray the beauty of Yosemite National Park. The 360 video captures great scenery of the outdoors and educates the audience on interesting facts. It’s an overall positive message to commemorate an important anniversary for national parks in the United States. We hope you get to enjoy this experience soon through the Samsung Gear available at the Oculus Store. You can also check out the video on Facebook.