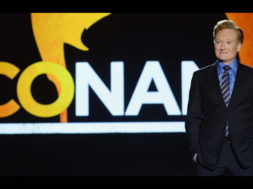 Conan is a unique host with a style that goes unmatched in television today. From his signature hairstyle to his presentation, the tall gentle giant brings joy and laughter to millions of people around the world on a daily basis. His refreshing segments and original skits, like the drivers ed story with Ice Cube and Kevin Hart, have gone on to become viral sensations. But none of this could’ve been achieved without his amazing cast and crew.

Conan currently works with Hollywood’s top creative minds such as Steve Beslow, that always seems to be one step ahead. Beslow and staff have been able to implement unique ideas and new segments to keep the show on top of prime time television against the likes of Jimmy Fallon and Jimmy Kimmel. Conan’s team has even implemented the use of virtual and augmented reality technology to take the audience to the next level when it comes to video content.

Just take a look at their segments during Comic-Con this year where they live-streamed the pre-show in 360. They were able to put together a quality presentation for everyone to see in an immersive environment. While some people probably saw the stream through their desktop or mobile feeds, many others were able to tune in using VR headsets to be immersed in their live broadcast of the show.

We were able to catch up with Steve Beslow himself to get a detailed understanding on how their team operates when it comes to 360, VR, and AR content.

What has recording the show in 360 been like these past few years?

“We’ve been doing innovative stuff. Even looking back two years ago at Comic-Con we shot with 4 separate cameras and used an Oculus to create a director’s view. We were able to cut together a program feed that showed you the ideal show with the clips that we were using. You might start in the audience and then you’d see what the segment looks like on stage. Then you might see what it’d might look from the balcony.

This year we took it a whole new direction and did a live pre-show from Spreckels theatre. We were actually live-cutting instead of doing a program feed between different cameras throughout the studio and doing a live show on the roof.

So production wise, we’ve gone from a single camera 20 feet away to being up in Will Smith’s face while he’s jumping around on stage, to literally being live on Facebook and YouTube moving around the theater in real-time.”

How is Conan360 transforming audience viewership? What has the feedback been like so far?

“Feedback has been fantastic. A lot of it is happening on the platforms themselves. Three years ago when we did our first Conan360 from San Diego at Comic-Con we built out our own player. It was all custom. So we had to drive people to that one experience to see the 360 video.

Last year YouTube became a big player in 360 and we were able to utilize that a lot. Facebook was there but their player was sort of serving lower quality video. But this year we were able to give everyone the experience that they were ready for.

That’s a huge change for us. That’s been able to bring our audience from a few hundred thousand people to tens of millions for Conan360 this year at Comic-Con. It’s been incredible.”

How was the new 360 segment received at Comic-Con?

“Great! We’re becoming more obvious about it and engaging more directly with people. Three years ago we tried to hide the 360 cameras and make them not as intrusive. Now when we want to put a 360 camera on stage we put it there.

We tell our audience ahead of time but yeah, we literally pulled people out of the crowd this year to play games in front of a 360 camera. We had one at the guest entrance of the show before the tapings. We were able to pull some of the celebrities and guests as they were coming into the theatre to talk to them.

It’s been amazing how easily it’s becoming integrated into the actual run of the show. It’s become a normal piece of business for us.”

Does your team have any plans on working with other forms of VR/AR technology like the Clueless gamer segment where Conan played a VR game on the Oculus Rift?

“We’re always trying to innovate and use different forms of technology. Even before we did that (Clueless gamer segment), we did a mixed reality piece at the YouTube VR space that was well received. And around that same time when we went to New York where we actually made an augmented reality app to celebrate us coming back to New York.

It was sort of a play-on the Pokemon Go functionality where depending on where you were in New York you can catch little Conan running around eating jelly sandwiches. If you caught all of them, you won free tickets to our show and gift bags. It was a really great experience.

VR is definitely at the top of the list for us. We’re trying to use every bit of new technology out there. You can definitely expect us to continue expanding our use of that technology both on the show and for digital specific pieces.”

Do you think VR is the next platform?

What your seeing now is a really interesting approach when it comes to content creation. With any new piece of technology especially for video viewing it’s all about how fast people are adopting it.

I think as people continue to consume more and more of that type of content in the places where people are already consuming content, the amount of premium viewing experiences is only going to go up. And obviously the more people that are watching on those platforms the more people there are to create content for.

Does the team have any plans to do a special 360 or VR episode in the near future?

Stay tuned. We are heading to Israel for our special travel episode!

One of the reasons why the show has been able to do so well is due to the fact that Conan has such a brilliant team that’s able to amplify his personality on set. It’s quite evident through this detailed conversation with Steve Beslow that their team likes to push the boundaries and come up with ways to entertain all of us, even if it’s an experimental idea.

Make sure to tune in this September to catch Conan’s special segment where he goes to Israel and does what he does best; entertain us in glorious fashion. Oh, and they might be releasing some 360 videos from their trip in Israel so make sure to stay tuned for that as well.