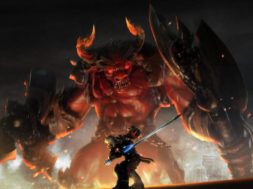 Eternity Warriors is a beloved game recognized by millions of fans worldwide. Debuting six years ago as a mobile game, the popular franchise is now making its way to VR. Developed by Vanimals Studio, this new VR experience will pit you against the strongest of foes in unsettling environments.

“We at Vanimals have invested a lot of time building and polishing the core immersive experience of Eternity Warriors VR and we are proud of what we have achieved so far,” said one of the team members at Vanimals. “We believe that this love and attention will show through in the Early Access version of the game.”

Currently, Eternity Warriors VR is available on Steam for $12.74 with a 15% discount. The game is compatible with both the Oculus Rift and HTC Vive which allows you to have some choices when it comes to HMD.

According to Vanimals, the game is currently very stable with 3 hero classes to choose from. The game will also be multiplayer allowing you to strategize with your friends.

Equipped with a sword and shield, the warrior excels at close combat. Slice and dice enemies who get too close, and once your sword is charged swing it to shoot a sword beam at far away enemies. Your shield is not only is good for protection, but can also deflect enemy projectiles and send them back where they came from, heck it can also fling enemies into the air leaving them powerless. Oh… and did I forget to mention you can shoot a laser beam out of your hand? Well you can.

Armed with a bow and arrow the hunter specializes in long range combat. The hunter has 2 arrow types in it’s arsenal, fire arrows and seeker arrows. Shooting a fire arrow will deal in massive explosive damage while the seeker arrow can lock onto multiple targets. The hunter also has access to a force field which can freeze enemies caught within its reach, so you can pick them off one-by-one. Also the bow is also blade, so there is that too.

Wielding both a revolver and a shotgun in each hand, the Gunner is ready for any situation. Deploy a shield to give yourself some cover and then pick off enemies far away with perfect precision using the revolver, or just blast them away with your shotgun once they get close. The revolver can also be charged making it the perfect killing machine.

From the trailer itself you can see that the game will be stationary where the enemies will be coming towards you. You’ll have access to different weapons which is dependent on the hero class you choose. It seems as though that the friends who join you in the game will appear as blue avatars where you can make out the outline of their hero class.

Weapons such as shotguns, pistols, bows, and swords will be at your disposal. There will be a variation in maps with many different types of enemies. If you’re familiar with the Eternity Warriors franchise then you’ll know some of the basic outlines to the game. Make sure to give this VR title a go as it looks action-packed and full of crazy monsters. Let us know your thoughts on the game.