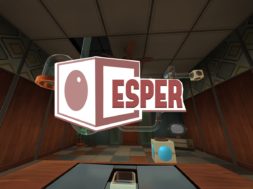 Esper is a puzzle game set entirely in a single room. As one of a number of ordinary citizens who have recently been endowed with the power to move objects with their minds, you have been enrolled by the government to undertake a series of tests to show that you are in control of your powers.

Players will use their psychic abilities to pick up objects and solve increasingly challenging tests in order to demonstrate that you are definitely not a threat to the fragile fabric of society.

In the trailer you can see how you will have to move a variety of objects through a series of puzzles, tubes, moving walls, and more. Players will have to utilize their controllers and a sense of touch to figure out the puzzles.

Esper is already available on Samsung Gear VR, Microsoft Mixed Reality and as part of Esper The Collection on Oculus Rift – bringing the total number of VR platforms supported later in the year to seven. In addition, Coatsink will be bringing Esper to HTC Vive starting on July 6th. The game will be priced at $8.99.