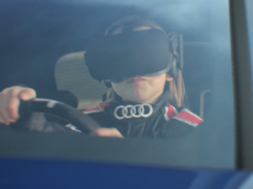 Test driving a new car looks to take a bit of a turn with the release of Enter Sandbox by Audi. In this application, you’ll have the opportunity to put the Audi Q5 to the test in virtual reality. Enter Sandbox will allow you to create your own track in a virtual sandbox where you can morph mounds of dirt into jumps, curves, hills, and cliffs. You can also dig your way towards the bottom where you’ll find a pit of water. The VR experience will allow you to drive through it if preferred.

Audi has developed Enter Sandbox with the nostalgic idea of awakening your inner child. They want you to drive from within the car where you have the freedom to race around your own creation rather than taking the standard test drive around a local block. In this VR experience you truly have the ability to put the car to the test. And to bring this to life, Audi has partnered up with MediaMonks who took care of the design and creation of Enter Sandbox. In a brief statement, Johan Ansterus, VR producer at MediaMonks described how this experience works. “This is done in two steps. First we introduce you to this amazing sanbox where you can shape your track and build jumps. Then we take that excite creation into real-time VR. Put you behind the wheel and let your drive the same track as you shaped.

Developing this experience also took a lot of imagination. “To make this happen we created an installation where sand is carefully scanned by a depth sensing camera,” said Bo Gustafsson, the VR director at MediaMonks. “From that unbelievable sandbox world is rendered. Then we drop you in, in a miniature car and you’re free to explore your creation in VR.”

Thomas Soderlund, the technical director at MediaMonks elaborated further on how they made Enter Sandbox. “To capture every bump and curve the sand is bombarded with short burst of infrared light. The sensor measures how long it takes for the light to bounce back from each surface point and transfers that into terrain data.”

This project is very similar in blueprint to what the team at UC Davis published a while back with an augmented reality sandbox. Both projects use the Xbox Kinect camera to detect depth in sand terrain within an enclosed box. The published documents by the team at UC Davis shows how they measured terrain in a similar way and how water can be reached if the terrain was dug deep enough. UC Davis has made this public for everyone to experiment with. The major difference is that one box is VR and the other box is AR.

Enter Sandbox VR experience has been developed for the Oculus Rift VR headset in Norway with no word on its availability outside of the country. They’ll be going on tour with the VR experience starting February 24 – April 7 in Norway. Audi wants test drivers to feel the rawness of the experience with the real feel of the steering wheel that mimics the Q5. Audi may release the experience elsewhere around the world after their Norway tour.