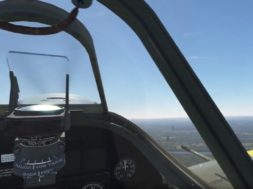 Have you ever wanted to feel what it’d be like to get in an aerial combat? If so, War Thunder by Gaijin Entertainment has you covered. In this free-to-play, cross-platform military game you’ll be fighting across the open sky in armored vehicles from World War II and the Cold War era.

War Thunder offers a highly detailed and personalized military aviation and land battle experience, giving players access to hundreds of models of aircraft with detailed cockpits, ground vehicles with awesome firepower, flying and driving skills that can be honed and improved with each mission.

The video above shows some of the actual gameplay from War Thunder where you’re able to rain down onto enemies with armor piercing bullets. You also have access to some awesome views with the sun shining down on you.

War Thunder isn’t a new VR game and was actually released early last year. However, it offers premium gameplay where you take to the skies to down your opponents. It also provides users the feeling of a an open virtual world where everything looks infinite. There isn’t a clear boundary drawn on the map and looks as if it goes on for miles. That is what drew many users first to VR and War Thunder captures that message pretty well.

War Thunder is available for free today on Steam for Oculus Rift and HTC Vive users. So if you have yet to try out the game I’d make sure to give this experience a go. Let us know what you think!