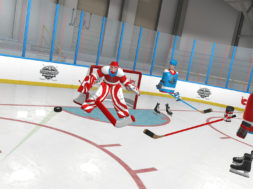 The NHL Playoffs is well underway and what better way is there to enjoy hockey than actually playing the sport… in VR!

Brosvision has recently launched an immersive hockey game called Hockey Player VR that allows you to play the sport in first person view. In the game you will develop your own tactics and tricks to score on the opponents and goalies.

In the trailer you can see that you’ll be whipping around the puck and play against real players. It’s always an joyous time when you can slap a puck around and you’ll have the chance to do so in virtual reality.

Hockey Player VR is currently available on Steam for $4.99. You can download the game for both the Oculus Rift and HTC Vive. Make sure to give it a try while the NHL playoffs is under way.