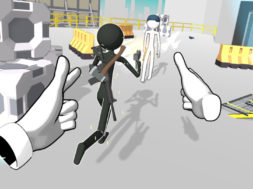 Do you enjoy cartoonish stick figure fighting games where you can blast away at your enemies? Well you are in for a treat as Holonautic has just released that very game in VR called Holoception.

This is a new type of VR game where you will be able to go from 3rd to 1st person view with this cartoon-like animation. And the most enjoyable part to the game is the physics-based movement that they have incorporated into the game.

Holoception is ultimately a combat arena fighter. The hero mirrors your head and hand movements, so you will be able to fight with your unique style. Players will unlock weapons, double jump, attack in slow motion, grab the gravity gloves or squeeze the rubber ducky. It’s all up to you.

As you progress throughout the levels you will discover new ways to fight and defeat your opponents. Not only will you have access to guns but you will also be able to use katanas to cut down your enemies.

The trailer shows you how goofy and action packed the game really is. You can currently purchase the game for $19.99 on the Index, Vive, and Rift HMDs.

This is a nice change of pace from many of the new VR games that have been released. Make sure to style on your opponents and create some epic moves.