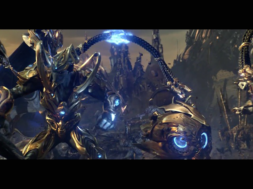 StarCraft is known to have started the modern esports movement back from it’s initial launch of the game. The franchise brought on a new type of circuit for competition with prize pools, sponsorships and even pro-gaming teams. While the popularity has fizzled out to some degree, it’s still a beloved game in the minds of PC users world-wide.

And to honor its massive success and love for the game, Blizzard announced that they’ll be releasing a remastered version of StarCraft with HD qualities.

StarCraft®: Remastered upgrades the essential sci-fi strategy experience from beginning to end. Welcome back to the original game and its award-winning expansion, StarCraft: Brood War.

We’ve remastered our units, buildings, and environments, improved game audio, and broadened our supported resolutions. Illustrated interludes bring the struggles and victories of heroes like Artanis, Fenix, Tassadar, Raynor and Kerrigan to life like never before. Most importantly, the strategy gameplay that StarCraft perfected years ago remains unchanged.

StarCraft led us on some epic journeys with these beloved characters that embarked on massive quests to save the universe. Recently at Gamescom, Blizzard held a live orchestra concert that went along with the cinematic scene from Legacy of the Void. Led by Composer and Senior Director Russell Brower, you get to see an amazing 360 video of the event.

What are your thoughts about Starcraft?