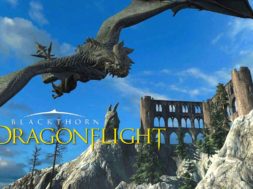 Blackthorn Media has just announced the release of “Dragonflight,” a cinematic VR arcade experience with interactivity and six degrees of freedom. The game is currently on Early Access for SteamVR where the studio plans to launch the full version on July 27th. It’ll be distributed on Steam, Oculus, and Viveport with plans on releasing for PSVR some time later down the road.

“Dragonflight” takes users on a journey through worlds of medieval fantasy where they can engage in pitched combat while riding a spectacular fire-breathing dragon. The experience features destructible environments with fast-paced combat while enemy dragons swarm the skies. Ancient castles teeming with archers and towers shrouded in mist add to the realistic environments. The culmination of the experience is a showdown with massive dragons in the canyons of a lost society of dragon worshipers. The VR experience of the “Dragonflight” franchise is just the beginning of a deep multi-level storyline and serves as a preview to episode one of an eight-episode story.

“Everything we do is executed at the highest level the art and technology of VR can attain. Its amazing what a room full of highly trained CGI artists with decades of experience in cinematic storytelling can do.” said Larry W. Jones, CEO Blackthorn Media. “The only way to ride a more realistic dragon is to breed them.”

Audiences got their first look at “Dragonflight” during the 2016 Tribeca Film Festival and a more finalized version premiered at this year’s The Art of VR NY. “Dragonflight” was created by Michael Conelly and produced by the creative team at Blackthorn Media whose CGI work on the films “Life of Pi,” “Narnia,” “The Matrix,” “The Golden Compass,” “Hunger Games,” “Zootopia,” and “Snow White & the Huntsman” have garnered numerous Academy Awards.

“We are thrilled to bring “Dragonflight” to anyone who ever wondered what it would be like to have your own dragon,” said Michael Conelly, president of Blackthorn Media. “Plus, it’s just fun to ride on the back of a dragon and blow s#^@ up!”

Make sure to try out “Dragonflight” during the upcoming Game of Thrones season to feel what it’s like to ride a dragon into combat, just like Daenerys Targaryen. The game will be available for $19.95 starting July 27th.