Engage In A Deadly VR Race With ‘Death Lap’ 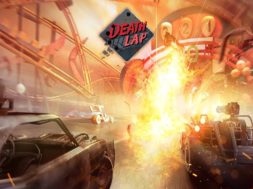 Engage In A Deadly VR Race With ‘Death Lap’

By taking some bits from Twisted Metal with a mixture of Mario Kart, Death Lap becomes a new type of racing game in an immersive environment.

The game takes its name from an annual tournament held once a year, where drivers wield deadly short- and long-range weapons and the first to cross the finish line wins. Behind the race is a mysterious person named Nitro Saint Payne—a marvelous yet tragic man with a definite need for speed. He will be your host for the game.

Nitro Saint Payne is a fictional character inspired by a mix of famous supervillains. This includes inspirations from “Marvel Comics, a combination of an evil genius and a hitman; Mojo from Marvel Comics, a ruler, slave trader, and host of a deadly show,” according to Stéphane Intissar from OWZE Games.

There will be five different vehicles you can choose from. Every vehicle will have its own unique characteristics and flair. Oh, and it will also include some interesting weapons for strength, weaponry, and special abilities.

There will be five deadly tracks to choose from which includes a psychedelic desert, oil on fire in the desert, Las Vegas by night, an abandoned theme park, and a giant pinball.

The game will be single or multiplayer where every race allows up to six players to fight each other with integrated VoIP. This will enable players to communicate with their opponents easily. Also, racers rank against others on the global leaderboard.

Death Lap will be coming to the Oculus Quest and the Rift platform in the coming months. We’ll provide a date once that information is released.