Home VR News This Is What Elite Dangerous Looks Like On The Pimax 8K Headset
VR News
April 10, 2018 Griffin Streeter 23 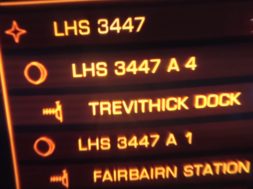 Pimax seems to be inching ever closer to release of their upcoming HMDs as the company announced its first shipments of the 8K M1 prototypes. The startup company has chosen 10 participants that will be reviewing the headsets prior to the consumer version launch.

To continue piquing some of our interest in the upcoming 8K headset, Pimax has released a “through the lens” video of what VR games will look like on the HMD. In particular, they have uploaded a video titled “[Pimax 8K through the lens] Elite Dangerous + Pimax 8K v5 prototype” that shows us the clear images you can see through the display.

When you watch the video you can see how clear and legible the text is in the game. It mitigates that screen-door effect that’s visible on many other HMD devices. Every word seems quite legible and the graphics look quite good in comparison to many competitors out there. While the headset is quite big and clunky, you can see why it was designed that way.

The HMD houses 2 x 3840 x 2160 displays that provides 200 FOV which is far superior than any other headset out there including the HTC Vive Pro. On paper, the Pimax boasts quite a resume with specs that are beyond any consumer ready VR headset.

But before anyone jumps on the bandwagon we will have to wait and see the reviews that come in from the participants receiving the 8K M1 prototypes. What are your thoughts about the headset?