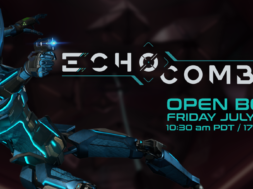 To celebrate the one year anniversary of Lone Echo and Echo Arena, Ready at Dawn studios is opening its second open Beta weekend for the upcoming game Echo Combat.

Friday July 20th at 10:30 AM PDT / 17:30 UTC through Sunday July 22nd at 10:00 AM PDT / 17:00 UTC players will be able to login and join the new combat game in VR. In addition to a more stable gaming experience, the anniversary event this weekend will introduce the ability to use your weapon in your left hand. During the event, players who complete a match of Echo Arena or Echo Combat will also receive a limited-edition anniversary unlockable, which is a welcomed feature.

As of right now there are only two abilities, healing allies using a beam to repair them and creating a shield for you and your team to use for more cover. You will also have grenades that you can use your advantage! One is thrown like a disc that you can detonate at your will and another one that you throw at enemies to stun them.

Players will have three different guns to choose from for different play styles. The Pulsar is an assault rifle, Nova is a shotgun and comet is a sniper rifle. So far there is only one map but this will expand according Dana, Ready At Dawn’s Lead Game Designer. He ensured us that this game will be supported with new updates which means we can expect new maps, weapons, and abilities!