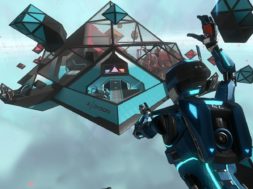 Ready at Dawn in partnership with Oculus has announced that Echo Combat will be launching on the Oculus platform beginning November 15th.

Rift users will have the ability to play this new high-octane VR game in a PvP environment with friends and foes alike. Echo Combat is a team-based competitive zero-g first-person shooter from the creators of Echo Arena and Lone Echo. It is an expansion to the Echo VR franchise. Play as a futuristic military robot in a unique first-person competitive space combat shooter set in the Lone Echo universe. Built upon Lone Echo and Echo Arena’s core mechanics, Echo Combat offers compelling, novel, and competitive combat beyond anything experienced before.

Below are some of the things you get to enjoy in Echo Combat:

Parties: You will now be able to form parties in Echo Combat.

Arc Mine Balances: The Arc Mine now continuously detects enemies while armed, and allows detected targets a short window of opportunity to either escape from its radius before it stuns them or destroy the mine.

Instead of pinging periodically, the Arc Mine will now constantly search for enemies within its detection radius. Upon detecting an opponent player, the Arc Mine will now emit a warning sound as it begins to activate. If a detected player can escape the mine’s detection radius before it finishes activation, the mine will now return to scanning. Skilled players can use this activation time frame to find and destroy enemy Arc Mines.

The Arc Mine will now begin its cool down even while the player has an armed Arc Mine placed on the battlefield. If, upon full regeneration, the player pulls out a new Arc Mine, the original armed one will now disappear.

Echo Combat Fission Map Changes: There have been a number of changes to the environment in the Cargo Bay that serve to help the Attacking team push the Payload out of its initial room;

• Instant Repair, a healing grenade useful for self-healing and saving your
teammates

• Phase Shift, a TAC-MOD that will allow you to escape hairy situations or get past enemy lines by becoming temporarily incorporeal NEW SYSTEMS

• Unique Combat Customization (note that all of these will be available for use for Arena bodies as well!)

• Arc Grenade will now chain between nearby enemies when triggered

Oculus Rift owners will be able to purchase the game for $9.99 at launch. This is a follow-up VR game to Ready At Dawn’s immensely popular game called Echo Arena.