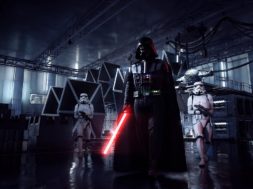 EA has made some bad impressions recently within the video gaming community. Star Wars: Battlefront II was a game that many Star Wars fans and gamers were looking forward to playing. But EA has found that grinding 40 hours for a character or paying for a character in-game was the best option for players.

With their over-the-top in-game transactions, loot-boxes, and DLCs, gamers have had enough with the company and have unleashed fury by putting together petitions and boycotts. But to the everyone’s surprise, EA has released an online statement addressing some of these problems.

Since the start of the project, listening to fans has been important in making sure Star Wars™ Battlefront™ II is the very best experience for all of you. We’ve done this with the closed alpha, through the beta last month, and our Play First Trial. And we continue to make adjustments based on your feedback as the game launches worldwide this week. Listening, and providing choices in how you play, will always be our principle with Star Wars Battlefront II. We want to ensure the game is balanced and fun both today and for years into the future.

Making games great comes from regular tuning. As one example, today we’re making a substantial change based on what we’ve seen during the Play First trial. There’s been a lot of discussion around the amount of in-game credits (and time) it takes to unlock some of our heroes, especially Luke Skywalker and Darth Vader. Unlocking a hero is a great accomplishment in the game, something we want players to have fun earning. We used data from the beta to help set those levels, but it’s clear that more changes were needed.

So, we’re reducing the amount of credits needed to unlock the top heroes by 75%. Luke Skywalker and Darth Vader will now be available for 15,000 credits; Emperor Palpatine, Chewbacca, and Leia Organa for 10,000 credits; and Iden at 5,000 credits. Based on what we’ve seen in the trial, this amount will make earning these heroes an achievement, but one that will be accessible for all players.

It’s a big change, and it’s one we can make quickly. It will be live today, with an update that is getting loaded into the game.

We’ve also been listening to how much you’re loving features in the game (Starfighter Assault, 40 player MP battles, Darth Maul lightsaber throws, etc.) as well as what you haven’t liked. We know some of our most passionate fans, including those in our subreddit, have voiced their opinions, and we hear you. We’re making the changes to the credit levels for unlocking heroes and we’re going to keep making changes to improve the game experience over time. We welcome the conversation.

In fact, this Wednesday we’d like you to join us for a Reddit AMA with some of the key leads on our team. Stay tuned to our social channels for more info on the AMA, and our blog for continual updates on what we’re seeing, hearing and adjusting in the game.

For those of you already playing, thank you. For those of you looking forward to playing the Star Wars™ game you’ve been waiting for, thank you, too. The team is fully committed to listening to our community, continually adjusting the game, and providing even more great Star Wars content over the upcoming months and years of live service updates. More to come.

This statement is coming from EA setting the world record for the most downvoted comment on Reddit which has reached over 540K downvotes. They first stated:

“The intent is to provide players with a sense of pride and accomplishment for unlocking different heroes.

As for cost, we selected initial values based upon data from the Open Beta and other adjustments made to milestone rewards before launch. Among other things, we’re looking at average per-player credit earn rates on a daily basis, and we’ll be making constant adjustments to ensure that players have challenges that are compelling, rewarding, and of course attainable via gameplay.

We appreciate the candid feedback, and the passion the community has put forth around the current topics here on Reddit, our forums and across numerous social media outlets.

Our team will continue to make changes and monitor community feedback and update everyone as soon and as often as we can.”

Now we’re seeing that EA has changed it’s strategy for Star Wars: Battlefront II where Luke Skywalker and Darth Vader will cost 75% less in game credits. This change brings it down to 15,000 to purchase these two hereoes. It’ll cost 10,000 credit to purchase Emperor Palpatine, Chewbacca, and Leia Organa. It will cost 5,000 credits to purchase Iden.