E3 2017: Bloody Zombies By nDreams Allows You To Play With Friends With Or Without A VR Headset 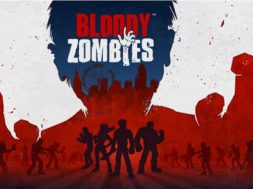 E3 2017: Bloody Zombies By nDreams Allows You To Play With Friends With Or Without A VR Headset

There were many intriguing VR games during E3 and Bloody Zombies by nDreams was one of them. Bloody Zombies is a co-op brawler designed to be played with any combination of flatscreen and major VR headsets. The game itself takes place in London where the city has become overrun by hordes of mutated zombies. The mission for you and your friends is to eliminate this walking plague as you are the last line of defense.

During our exclusive demo at E3, I was joined by three other players to sit on a couch and play Bloody Zombies. We had 4 controllers hooked up to the PC with one Oculus Rift headset available for use. When we first started the game, I didn’t quite understand the dynamics to which this game was compatible for VR. All I saw on the screen was a typical 2D side scroller game without much depth. But once I put on the headset I realized that the game was much more.

With the Rift headset on, I went from seeing 2D to a more expressive 3D environment where I can turn my head to see depth and length of the virtual world. Characters were instantly enriched and the play of the game was that much more enhanced. In fact, it actually got me thrilled to play the game.

The really cool part of this game is how you can involve three other friends to play the same game with you on one console or PC. While you can only have one VR headset going, you are still able to play the same game with your friends without having to setup additional rigs under one screen. This unique component makes it perfect for lounge and casual settings. Bloody Zombies doesn’t require you to put great lengths of time in one go. It’s a casual game that you can quickly pick up and put down.

The creators behind Bloody Zombies has told us the game will be released sometime in the next few months on Steam, PlayStation, Oculus, and Xbox.