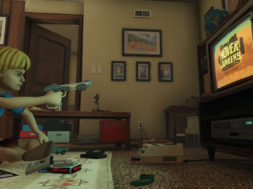 Duck Season is a highly anticipated VR title from Stress Level Zero, developers behind games such as Hover Junkers. Inspired by the 1984 classic, the new Duck Season will be taking you inside the virtual world where you’ll be seeing first hand the terrors that come along with the game.

You’ll be playing as a kid who recently got your hands on the coolest game of 1988, Duck Season. Your mom was fortunate enough to go to a local store and rent the game for your Kingbit Entertainment System. Unfortunately, as you binge play the game, it becomes apparent that all is not right with the game.

Stress Level Zero has mentioned that there will be many surprises throughout the game. Here’s what to expect in the upcoming title:

We heard about this upcoming game back in March and much of it seems to be improved from just a short few months. Brandon Laatsch, one of the Co-Founders of Stress Level Zero, said that there will be multiple endings that’ll be determined by your actions. Additionally, the game will have around 4 hours of gameplay.

Duck Season will be available on both the Oculus Rift and HTC Vive starting September 14th. There is no determined pricing on Steam yet and the Oculus Store page is not yet available. More info to come