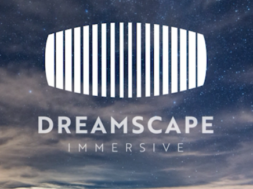 Dreamscape Immersive VR, a new Los Angeles-based startup, is bringing a VR Multiplex to LA this coming September where the audience can actually insert themselves into the film and become part of the story.

“Today, audiences can see movies in theaters in three formats:  2D, 3D, and IMAX.  Dreamscape establishes the Fourth Platform – VR,” said Dreamscape co-chairman Kevin Wall. “Now, audiences will have the ability to purchase a ticket, step inside of the story and experience it personally in a way never before imagined.”

The concept is brand new and emerging, and the company is still shrouded in secret. Dreamscape emerged out of stealth mid-February, and there is still much that remains to be revealed. What we do know, is that the company has an impressive executive board and financial backers. Kevin Wall is an Emmy-award-winning producer and his co-chairman,Walter Parkes, helped create DreamWorks Pictures and served as the studio’s president for over a decade. The company’s CEO is Bruce Vaughn, who until last year was Chief Creative Executive at Walt Disney Imagineering. Dreamscape has raised $11 million in funding in a round led by Bold Capital, with contributions from Warner Bros. 21st Century Fox, Metro-Goldwyn-Mayer (MGM), IMAX Corporation, Westfield Corporation, and Steven Spielberg. Advisors include star designer Yves Behar and legendary film music composer Hans Zimmer.

Dreamscape was born after Wall’s trip to 2016’s Sundance Film Festival. On his way to the actual festival, he stopped at THE VOID HQ, an immersive VR studio also based in Salt Lake City. THE VOID takes audiences beyond the limits of reality into a rich immersive experience where they can connect with others, while engaging all their senses. By combining a physical set with real-time interactive effects and going beyond virtual reality, THE VOID lets users not only watch a movie or play a game, but live inside it, creating unforgettable experiences and memories.

THE VOID is one of few immersive VR studios in the world, with locations in NYC and Dubai. Another major competitor is Australian-based Zero Latency, with centers in Australia, Tokyo, Madrid, and Orlando.

Free Roam VR technology powers the immersive experience. Backpack computers, head mounted displays, and arrays of sensors for complex real time motion capture, fully immerse the user in a digital world, where they are free to roam and interact.

Although it is still unknown exactly how Dreamscape Multiplex will operate, we do know it’s first location will be in the Westfield’s Century City Mall and the company plans to expand as demand grows.