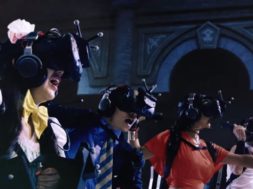 First opened to the public on April 27th, at the VR Zone in Shinjuku, players take on the role of a warrior, priest or mage, with each class of character capable of attacks using handheld controllers. Wearing a customized HTC Vive VR headset connected to a backpack that grants them wireless mobility, teams of up to four can step into an empty 240-square-meter room where 40 Vicon V5 motion tracking cameras record their movements using location based VR. Players can then physically interact with the environment as they explore the monster-filled world of Dragon Quest.

“After the VR ZONE facility launched last year, we’ve been looking at ways to take advantage of the open space, and this space really goes well with the concept of the role-playing game,” said Yukiharu Tamiya of BANDAI NAMCO Amusement Inc., who oversees the facility. “The DRAGON QUEST games are about adventure, so going into a VR world and being able to walk around can give the players the sense of traveling through an unexplored land.”

While groups of up to four can compete together on a team, the room itself can hold up to three groups at a time. The Vicon cameras can track up to 150 different objects at 180 fps, helping to ensure low latency and nearly instantaneous movement recreation in the virtual world.

Players fight familiar monsters from the series, including the jelly-like Slime and the bat-shaped Dracky, all leading to a final confrontation with the end boss, Zoma. Participants playing as the warrior will lead the charge with a sword or rod and a shield to defend the team, while the mage and priest concentrate on casting offensive and healing spells.

This is only available at VR Zone Shinjuku and the experience will cost around $29 USD. Some of the other exclusive VR games available there are Ghost in the Shell: Arise Stealth Hounds, Mario Kart Arcade GP VR, and Dragon Ball VR: Master The Kamehameha.