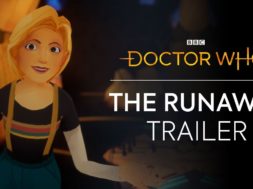 Doctor Who, one of the longest running TV show series is set to make its public debut to the world of VR. BBC first showed the glimpse of Doctor Who: The Runaway VR experience at this year’s Tribeca Film Festival with the animated characters being voiced by the original actors from the show.

In this experience players will be stepping inside the TARDIS where you get to see Jodie Whittaker reprise her role as the Doctor in animated form. You will become her champion and help her on this crazy adventure while facing a deadly threat.

You will be involved in a collision where you will wake inside the TARDIS. The Doctor introduces you to the person, or thing, you collided with. He’s a strange and magnificent ball of living energy called Volta. Part surly teenager, part bomb, Volta is very unstable. In fact, he’s primed to explode. Big time. Unless he can be returned to his home planet, sharpish. The problem is, a squad of galactic busybodies has other plans for Volta. Bad ones. Drawn into a frantic chase, you become the Doctor’s unlikely assistant as she races against time to get Volta home to his parents. Armed with a sonic screwdriver, it is down to you to help the Doctor as she faces the forces of evil, and teenage angst, in this animated 13-minute VR adventure from the team behind Doctor Who Series 11.

The experience will Feature new original music from series composer Segun Akinola, Doctor Who: The Runaway has been written by Victoria Asare-Archer and directed by Mathias Chelebourg, whose previous VR films include Alice, the Virtual Reality Play and The Real Thing VR. It has been produced by the BBC’s digital drama team, BBC VR Hub and Passion Animation Studios.

The Doctor Who: Runaway VR experience is set to release on the Oculus Rift and HTC Vive some time soon. It will also make it’s debut on the Oculus Go and Samsung Gear VR as a 360 version.

tags: bbc doctor who the runaway vr experience
previous Valve Index VR Headset Starting At $499 With Bundle At $999 - Everything You Need To Know
next Flappy Flappy VR Is A Funny Game You Can Have Your Friends Try
Related Posts