Doctor Who: The Edge Of Time Makes Its Release 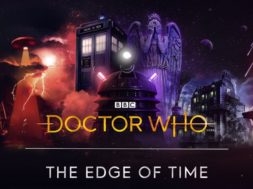 Doctor Who: The Edge Of Time Makes Its Release

During this year’s SDCC event, Oculus and BBC Studios announced that they will be launching a Doctor Who VR adventure. Now that day has finally come.

In Doctor Who: The Edge Of Time, you will be able to co-pilot the TARDIS with the Doctor (voiced by Jodie Whittaker) to explore the nooks and crannys in crossing the space time to a series of unique locations within VR.

A new mysterious enemy threatens to tear apart the universe and only you can stop them. Armed with the Sonic Screwdriver, players will solve mind-bending puzzles, grapple with iconic monsters and encounter new horizons in a quest to find the Doctor and defeat a powerful force that threatens to destroy the fabric of reality.

Pilot the TARDIS: Team up with the Doctor and travel through space and time to new horizons, piloting the brand new TARDIS as seen in the last series.

Immersive Entertainment: Experience the world of Doctor Who like never before and interact with tools such as the Sonic Screwdriver.

Authenticity: ‘Doctor Who: The Edge of Time’ is voiced by and features the Thirteenth Doctor herself, played by Jodie Whittaker.

Iconic & New Monsters: Stand against iconic baddies, including the infamous Daleks, and even come face-to-face with brand new, never-before-seen monsters.

Doctor Who: The Edge of Time is available on HTC Vive and Oculus Rift. If you happen to be a fan of Doctor Who, this might be worth a visit in virtual reality.