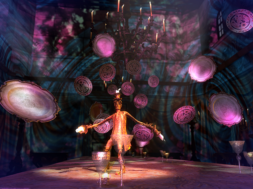 Disney’s new Beauty and the Beast live adaptation movie made its premiere today worldwide. The movie features Emma Watson as the infamous Disney princess Belle who falls in love with Beast, played by Dan Stevens. And to celebrate the premiere, Disney has released an interactive VR experience called Lumiere’s Dress Rehearsal.

This unforgettable VR experience puts you in the dining room of Beast’s enchanted castle, as Lumiere prepares for a special feast in Belle’s honor. Swirling napkins, spinning plates, and dancing flatware surround you as everyone’s favorite candelabra—voiced by Ewan McGregor—belts out “Be Our Guest” in classic Disney style.

Lumiere’s Dress Rehearsal is part of a collection on Disney Movies VR app available on the Oculus Store. The Disney Movies VR app houses several VR experiences ranging from Star Wars, Marvel, to other Disney adaptations. There, you’ll be able to interact with your favorite characters in the Disney franchise.

For people who don’t have access to the Oculus Rift and Touch, Disney has made a 360 video available on the Samsung Gear VR and Facebook of the Lumiere’s Dress Rehearsal VR experience. Here, you’ll get a glimpse of the singing and dancing from the magical household characters. While the 360 video is quite short, it’s packed with a lot of content.