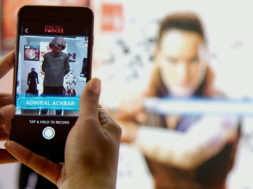 Are you ready to take a selfie or picture with your favorite Star Wars characters? You should be because Disney is revamping their Star Wars app to include an AR experience which allows you to bring the universe to life.

This is a part of a special event they’re calling Find the Force, a global augmented reality (AR) event rolling out on Force Friday II (September 1) to commemorate the worldwide launch of new products inspired by Star Wars: The Last Jedi.

“Force Friday II is a major milestone in the countdown to Star Wars: The Last Jedi. Star Wars has always championed new technology, and we are excited that augmented reality will allow fans to experience the universe in a whole new way,” says Kathleen Kennedy, president of Lucasfilm.

This creative AR event is somewhat of a treasure hunt where fans around the world will have to unite in the battle against the dark side in a unique three-day event. This will take place at over 20,000 retail locations across 30 different countries. This is a part of their product promotion for the upcoming movie, Star Wars: The Last Jedi.

Disney has stated that this event will occur between September 1 – 3. You can be a part of this AR treasure hunt by simply downloading the Star Wars app and visiting the participating retail outlets. When you’re there, find the graphics on the Star Wars products and scan the image which reads “Find the Force.” After you scan the graphic using the Star Wars app, it’ll reveal a special character which is brought to life using AR technology.

This will allow you to take photos, selfies and videos with these digitally animated characters. There will be 15 different characters in total during the 3 day promotional event.

“Force Friday II puts fans right at the center of the action using augmented reality to bring our characters to life like never before. The technology theme continues in the Star Wars: The Last Jedi product line, which is our most innovative yet — we can’t wait for fans to see what’s in store,” says Jimmy Pitaro, chairman, Disney Consumer Products and Interactive Media.

Disney will also be launching a Star Wars VR experience in partnership with The VOID where they’ll be putting you into the action in a special VR arena.

Make sure to take some good photos for us!