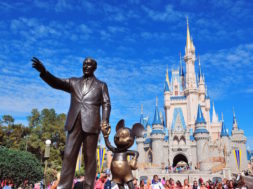 Disney Theme Parks are a place full of magic where you can catch some of the most iconic fantasy characters to ever exist. You’ll find millions of tourists flock over to this fantasy world to experience all that Disney has to offer. And while these theme parks sound like a perfect place to house virtual reality experiences, Walt Disney’s Chief Executive Office, Bob Iger, believes in a different form of technology.

Iger recently stated that reality-destroying headsets would be “ersatz” at Disney theme parks, according to LA Times. The CEO has ordered his team not to even think about using those mobile virtual reality headsets found at smaller theme parks such as Knott’s Berry Farm and Six Flags. Instead, the company will be focusing on adopting augmented reality technology.

In a recent visit to USC Marshall and Annenberg event in Santa Monica, the CEO referenced how they aim to bring a technology that blends both the real and virtual world. Iger stated that he’s been spending every Tuesday afternoon at one of Disney’s engineering labs testing out a HMD that allows him to wield a light-saber to combat a stormtrooper.

The HMD referenced is most likely Magic Leap’s secret headset that the company has been working on for years. The CEO expressed some concerns with the weight and comfortability of the current model but hopes it’s improved over time.

While he didn’t shed more details about the upcoming project, Iger is in favor of adopting augmented reality technologies into his Disney Theme Parks rather than VR. “What we create is an experience that is real,” said the CEO of Disney. “When you walk into Cars Land, you feel you’re in Radiator Springs because of what we’ve built – not only the attention to the detail, but the scale.”

Some theme park experts have previously speculated that virtual reality headsets would not be adopted at Disney Theme Parks. “Theme park purists don’t like” them, Martin Lewison, a business management professor at Farmingdale State College. “They’d much rather go on a $250-million ride at Disneyland than throw a mask strapped to a Samsung smartphone over my eyes.”

This is quite surprising as Disney is all about immersing people into their fantasy worlds. They want the audience to become a part of these places and experience what it would be like in the Star Wars realm or the little Mermaid. Disney’s virtual reality experiences might just be a vision for home based VR headsets.