D23: Disney Teams Up With Lenovo To Release ‘Jedi Challenges’ In AR 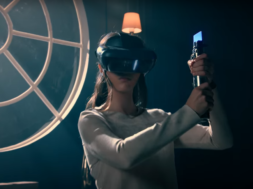 D23: Disney Teams Up With Lenovo To Release ‘Jedi Challenges’ In AR

Disney has been on the move today releasing tons of new IPs within their vast fantasy universe. Earlier today, Oculus made an announcement with Disney in releasing a Marvel themed VR game called ‘Marvel Powers United VR.’ Now, they’ve announced that they’ll be teaming up with Lenovo to develop their own proprietary AR headset capable of displaying quality experiences.

Together, they’ll be launching ‘Jedi Challenges’ where you’ll be able to wield a lightsaber using AR technology. During the D23 Expo in Anaheim, CA, people were able to watch footage of soldiers and AT-ATs fighting on the battlefield.

Disney has also announced that Holochess, the AR chess-like game will be coming to their AR headset down the road.

While not much else was revealed about this project, they have informed us that the headset will require a smartphone to operate, similar to how Samsung Gear VR works today. But Disney promised that it’ll have full line-of-sight to the outside world instead of it being a fully immersive experience like VR.

In the trailer you can see a young woman, who resembles Rey, wield a lightsaber while wearing an AR headset. The HMD itself looks rather large and you can’t really tell where the smartphone will be placed. The AR experience might also allow you to utilize a motion controller that resembles a lightsaber in ‘Jedi Challenges.’

Lenovo has created a landing page for ‘Star Wars: Jedi Challenges’ but doesn’t provide much information other than you being able to purchase the HMD in the near future at a Best buy or through Lenovo. You can sign up to their mailing list today to get updates when it becomes available.

The announcements of these upcoming IPs shows how the entertainment space is becoming more vested in immersive experiences and technology. We’ll keep you updated as more information is known about the proprietary hardware and the upcoming AR experiences.