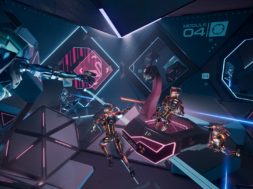 Echo Combat is a highly anticipated VR game on the Oculus Rift. Produced by Ready At Dawn, the game serves as a sequel to the already popular Echo Arena. The foundation of the two VR games are quite similar but you will notice distinct differences between the two as well.

In Echo Arena, your mission was to throw laser discs into a goal. In the trailer above you can see how you will have to move a payload to safety in Echo Combat, which is a whole different concept. You and your team will have to provide cover and lead a goose looking trailer to the end goal. This is similar in concept to Blizzard’s Overwatch.

In Echo Arena, you were only armed with rocket boosters and fists to do all the dirty work. This time around, you will be armed with laser guns that can take down the enemies. There will be floating objects to provide cover in addition to using the floating goose as a shield. Players will also be able to customize weapon choices before every match which is a welcomed addition. You can choose between weapons such as laser pistols and laser rail-guns. Players will also have the ability to toss laser grenades shaped like discs and static orbs which shocks opponents.

The game will still be played in 3v3 match settings and will require team work to win. Echo Combat will be the next step in competitive esports for Oculus and Ready At Dawn studios. People who attend E3 will have a chance to play Echo Combat at the Alienware Booth located in South Hall #647.

For those who can’t attend, you’ll have a chance to play the open beta starting June 21, 2018. If you were one of the many players who enjoyed Echo Arena, this will be right up your alley.