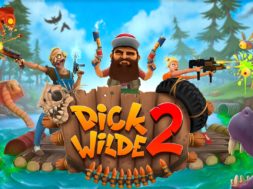 Bolvërk Games and PlayStack have announced that they will be releasing Dick Wilde 2 in February 2019 for PS VR and PC VR platforms.

Dick Wilde 2 is a sequel to the first iteration of the game that follows the adventures of Dick Wilde. Your job was to clear the swamps from the looming wildlife that made your life a nightmare. The sequel is set to follow the same theme except this time it’ll feature cross-platform compatibility with an online feature.

You and friend will be able to team up as Dick’s apprentice and set off on a mission in various levels. Also, this means that you’ll be able to play with friends whether its the PS VR, Oculus Rift, or HTC Vive.

You’ll have access to new weapons and face new bosses in Dick Wilde 2. This includes gravity guns, bow and arrows, mortars, drones, and many more. In the trailer itself you can see the various arsenals. You can also see the type of enemies you will be facing. More information to be provided soon.