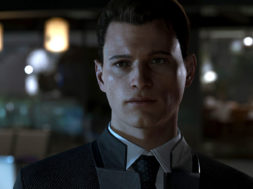 Detroit: Become Human is a major upcoming AAA title by Quantic Dream that’ll tell a unique story through the eyes of AI characters. In a blog post David Cage, Director at Quantic Dream, stated that the users will be playing the game as three different characters.

“Rather than a single, grand narrative, I chose to tell the story of three androids, three characters who discover their emotions and must choose their destiny.”

The overarching narrative itself will be about humans selfish dependency on AI and how we use to it benefit ourselves. “My first decision was to take the androids’, rather than the humans’, point of view,” said Cage. “Instead of the wicked AI who wants to destroy good humanity, I preferred a different angle: my story would talk about humanity on the decline: selfish, dependent on technology, concerned only with comfort. Opposed to this: a new, intelligent species that we created, which discovers the world, feels emotions and asks only to live.

I wrote this story with the personal conviction that it was not only a story, but a vision of the future: how will we react when machines we’ve created become more intelligent than us and show signs of consciousness? Moreover, is consciousness only a question of computing power or is it something else?”

Connor is a prototype android named the RK800, created by a company called CyberLife. His initial goal is to assist human detectives in their investigations by offering them technological assistance. He is also equipped with a social module specially developed to create the “ideal partner”, capable of integrating into any team. He is also equipped with special features, such as a real-time molecular analyzer and a sophisticated simulator that can reconstruct past events. He is exceptionally intelligent, cold and determined, ready to do anything to succeed in his mission.

When the first cases of androids with abnormal behavior are reported, CyberLife offers to send this prototype to assist Detroit police. Connor has already undergone field tests involving androids, but this is his first investigation.

Connor is sent to join Lieutenant Hank Anderson, a grizzled, alcoholic detective who hates androids. Connor will need to make use of his “psychology” module to earn the respect of his partner and discover the truth about deviants.

Markus is an android who belongs to celebrated painter Carl Manfred, an old man who has lost the use of his legs. If at first Markus was only a machine in Carl’s eyes, a paternal affection has gradually developed. Carl treats Markus as if he were human, teaches him to paint, exposes him to literature and music; develops the android’s spirit a little each day.

Eventually Carl comes to think of Markus like a son, much to the dissatisfaction of Carl’s biological son, Leo.

Markus’ journey will take him from caregiver in the service of an old man to leading the historic android revolution. But to lead a revolution will be much more difficult than anything Markus can imagine: he must contend with the factitious disagreements of his people, face insoluble dilemmas, moral choices and sacrifice.

He must choose a path between violence and pacifism, between a closed fist and an outstretched hand. Through his choices, Markus will write the history of his people and lead them to freedom… or destruction.

Kara is an AX400 domestic assistant model created by CyberLife. The AX400 is a common model, designed to take care of the housework and look after young children. They can speak 300 different languages, cook more than 9000 dishes, help children with their homework and play with them.

Kara is owned by a former unemployed taxi driver, called Todd Williams, a strange and unpredictable character. He is the father of a little girl named Alice, with whom Kara is tasked with taking care of.

Under harsh circumstances, they quickly learn that they are not safe with Todd. Both will run away and struggle to find a path to freedom.

Becoming fugitives, they will discover a disjointed world falling apart and understand the strange feeling that unites them. They will journey from encounter to encounter, confronting violence and hatred but also the empathy of those who keep hope.

You can see through the trailers how detailed the graphics are. From the facial expressions to the coloring of the skin, everything looks quite profound. Detroit: Become Human is available for pre-order today for $59.99 and will be available starting May 25, 2018.